New Jersey Governor Chris Christie takes a stand for better addiction treatment. While campaigning for president at a bar in a small New Hampshire community, Christie brought attention to an important problem by explaining how we treat nicotine addicts differently from drug addicts. We wouldn’t deny treatment to anyone else with a health problem, we need to stop turning away drug addicts and provide them with the health care needed to get better.

He starts his speech by sharing a personal and emotional story of his mother’s nicotine addiction. Despite her attempts to quit with gum, the patch, and even hypnosis, she smoked her entire life. When she was eventually diagnosed with lung cancer, everyone knew it was because she smoked, but he says: “no one came to me and said ‘she started smoking when she was 16 and after we told her it was bad for her, she kept doing it … we won’t treat her, she’s getting what she deserves.’ No one said that.” Yet somehow when it comes to other drugs like heroin, cocaine or alcohol, “we say: ‘Oh, they decided, they’re getting what they deserved.’”

The New Jersey Governor states that if you value life, then you need to value all life, not only when it’s easy. He ties his support for better drug treatment to being pro-life by saying: “I’m pro-life, and I think that if you’re pro-life that means you have to be pro-life for the whole life, not just the nine months they’re in the womb. It’s easy to be pro-life for the nine months they’re in the womb. They haven’t done anything to disappoint us yet.” He explains how he believes the life of a 16 year old girl addicted to heroin should be regarded as precious as the one in the womb. Whether you agree with his pro-life belief or not, he does make a good point. We should consider everyone’s life as important and worthy of care. 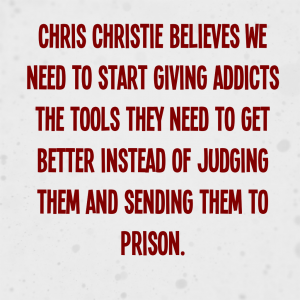 He talked about how addiction can happen to anyone, even his best friend who had it all came to struggle with addiction. This friend from law school was given Percocet when he injured his back and a year later his wife called Christie to ask him to set up an intervention with his other law school friends. He spent the next ten years in and out of rehab and lost everything. After losing his job, his home, his wife, his right to see his daughters and all of his savings, he was found dead in a motel room with an empty bottle of Percocet and an empty quart of vodka.

Christie stated that: “By every measure that we define success in this country, this guy had it and if it can happen to him in can happen to anyone.” He believes that we need to start treating people in this country, not jailing them. The New Jersey Governors speech has gone viral with his video already receiving millions of views. It seems Christie’s view of better treatment for addicts is being well received.