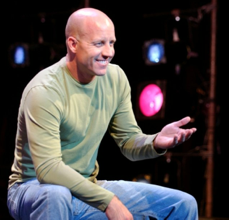 Mark Lundholm is a stand up comic who found his calling while attending rehab just outside his hometown of Oakland.

Not your average road to recovery, is it?

This is how he describes the long and short of his addictive life: By five years old, he was addicted to getting attention. By seven, he was addicted to being the class clown and making sure everyone knew who he was (oh yeah, and he started drinking then.)

By eleven, he made damn sure he was the most prominent kid in the room – usually achieved by being loud and obnoxious. By fifteen, he started smoking marijuana and couldn’t live without sugar and coffee. By the time he was seventeen, he had discovered sex and cocaine (usually together)… which lead to loving the rush of criminal activity, discovering and getting addicted to coke and meth and by the time he was twenty-five, he found himself with no one in his family to talk to and not a single friend, broken and totally alone.

Then, one night he stuck a gun in his mouth ready to end it all, pulled the trigger and the gun jammed. Although it wasn’t funny at the time, he now reminisces about how the first thought he had was “I suck at everything!”

Shortly thereafter, Mark limped into a detox center and got help.

It was a long hard process for him, but a couple of months into halfway house living without a clue of what he wanted to do, he saw an ad for auditions for a comedy troupe that performed at prisons, treatment centers and hospitals.

He auditioned and got in.

They performed at San Quentin and he recalls the troupe (and himself) being horrible. The group broke up soon thereafter. But Mark decided to strike out on his own. He really loved trying to take his story and turn it into a positive.

Today, Mark has been clean (and performing) for over 25 years.

You can see a snippet of his critically acclaimed one-man show here: “Addicted: A Comedy of Substance”

If you’re lucky, you can catch Mark performing at clubs all around the world.

To read all about Mark’s unlikely path to comedy, click here: Mark’s Path